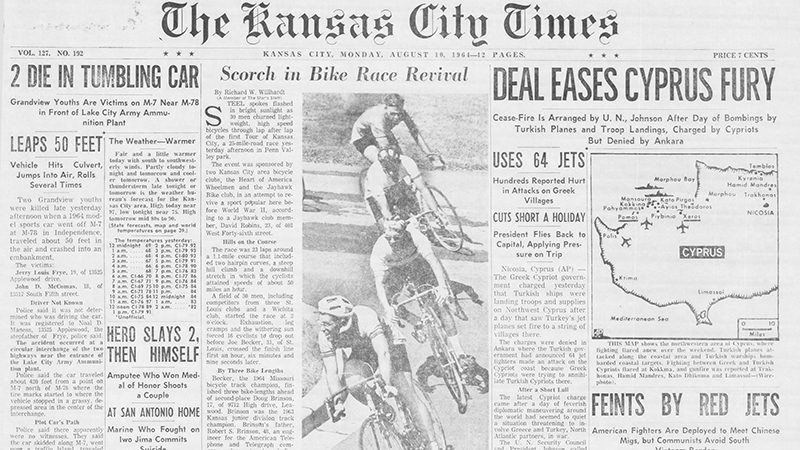 The very first Tour of Kansas City was held at Penn Valley Park in 1964. It was a single-day race with 30 riders participating from around the region. The original course that was used is no longer intact, but the race that was bred in that park has carried on for 52 years. Below, a Kansas City Times article details that day’s race. It is a pretty amazing article to chronicle not only the 1st Tour of Kansas City, but the history of Missouri area cycling as a whole.

The event was sponsored by two Kansas City area bicycle clubs, the Heart of America Wheelmen and the Jayhawk Bike club, in an attempt to revive a sport popular here before World War II, according to a Jayhawk club member, David Robins, 23, of 402 W 46th Street.

Hills on the Course

The race was 23 laps around a 1.1 mile course that included two hairpin curves, a steep hill climb and a downhill stretch in which the cyclists attained speeds of aout 50 miles an hour.

A field of 30 men, including competitors from three St. Louis clubs and a Wichita club, started the race a 2 o’clock. Exhaustion, leg cramps and the withering sun forced 16 cyclists to drop out before Joe Becker, 31, of St. Louis, crossed the finish line first an hour, six minutes and nine seconds later.

The race was tight, said Robins, who dropped out with a leg cramp after 12 laps, meaning those men who stayed in kept clost together. “Occasionally a man tried to break away,” Robins said, “but the pack was strong and bore down on him until he was forced back in.”

The pack consisted of 12 of the 14 finishers up to 600 feet from the finish line, when several men tried to break away, with Becker finally taking the lead.

Ten judges were working at the finish line, because bicycle races are often very close contests, Robins said. Each judge had the job to designate one of the first to tenth place finishers as his front wheel touched the line. Three of the places in the race were won by less than an inch.

Each cyclist wore a leather head-gear for protection, padded gloves, and short-sleeve jerseys with a pocket at the chest. Most had lumps of sugar, fruit or candy bars in the pocket, and ate them during the race to gain energy.

The bicycles weigh about 24 pounds and have multiple sprocket-wheels that produce combinations of 10 speeds. The tubluar frame is of a flexible steel allow and the high-pressure tires have a thin, hard rubber skin laminated to a silk lining.

Robins, who organized the race with the help of his wife, Linda, said he hopes to revive twhat was once a popular sport here. The Heart of America Wheelmen, which was founded in 1888, is the second oldest member club of the Amateur Bicycle League of America (A.B.L.A), he said. Though it has had, at times, as few as two members, it has never been defunct, he said.

Prior to World War II, bicycle races were popular here and throughout the U.S., Robns said. During the 1930s, he said, hundreds of persons attended cycle races held near the poineer mother statue in Penn Valley park.

Another event Robins hopes to be instrumental in reviving are Kansas City to St. louis Bicycle races, which used to be run over U.S. 40 highway, he said.

Bicycle racing, it would appear, is pretty much a man’s sport, Robins said.

The current holder of the women’s bicycle track championship is Miss Nancy Chappius, 17, of St. Louis. When she won her title at St. Louis July 17th, the judges required her to do just one lap of a fifth-mile course because she was unopposed., Robins said.

The 50-yard tricycle race preceded yesterdays’ main event in Penn Valley park. Sandra K. Deiter, 2-year-old daughter of Mr. and Mrs. Larry Deiter of 925 West Thirty-third terrace, was the winner. She was also the only entrant.