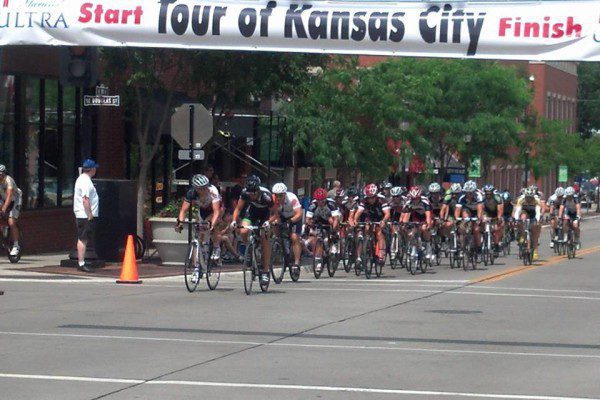 Tour of Kansas City 2015 will be held on the final weekend in May, the 29th, 30th, and 31st. The choice of an earlier date was due to a combination of factors and weeks of banging our heads against the wall. Several other regional races had moved their dates into the end of June; avoiding race conflicts as much as possible in MO, KS, NE, OK, and IA meant many weekends were just not viable.

The new criteium venue, at Truman Sports Complex, required some serious juggling to work around the Kansas City Royals schedule and several other large events being held at the complex in 2015.

As many of you know Cliff Drive is undergoing a construction project that is scheduled to be completed the 1st of June, after which, a second project will begin to divide Cliff Drive into motorized and non-motorized lanes. The parks department was gracious enough to allow us this one weekend, cleaning the course for us during the first project and holding off the second project until after these dates, to make sure we can still put on the traditional Cliff Drive Circuit Race this year.

The addition of the 5K competitive run also meant that area running events had to be worked around.

We are aware that this date conflicts with Dirty Kanza, a non-USAC sanctioned event. Unfortunately, this just was not able to be worked around, it was impossible to not conflict with something, somewhere one the calendar. While there will obviously be some overlap, we felt that Dirty Kanza attracts a different kind of rider than other road events.  Conflicting with DK will hopefully cause less conflict for racers than something like Tulsa Tough or the Memorial Day Weekend racing in the Burlington area.

The good news is that the earlier date could mean beautiful late-spring weather. But it is Missouri so in reality, we know it could be 106 degrees or there could still be snow on the ground.

Hopefully, next year we will have less to work around. Assuming the stadium venue remains part of the Tour of KC, we will always have to work around the pro baseball schedule. This could mean that the TKC dates float a bit each year. Hopefully, in the future, we will know the Royals schedule far enough in advance that we can work to avoid conflicts earlier in the planning stages.

The scheduling issues, while a nightmare for event promoters, is in many ways a great problem to have. The fact that the Midwest cycling calendar has so many events that we are having a hard time working around them all, means that area cycling is growing, and stronger than ever. It means that there is a demand for events around the region and to satisfy that demand, more events are popping up all over the place. That increased demand can only mean an increased cycling base. An increased cycling base, both competitive and non-competitive,  improves our sport for all of us.